Every year, prospective students frequently ask about their chances of admission to Waterloo Engineering.  As you can probably imagine, admission to Waterloo Engineering is highly competitive.  As one of Canada’s premier engineering schools for undergraduate education and as a worldwide leader in co-operative education, our programs are quite popular among prospective students.

Since 2014, Bill Anderson has posted on his blog an easy-to-read graphical version of the information that appears on the Waterloo Engineering website and in our promotional brochures.  Here is a link to last year’s version of the blog post.  Bill bases this information on the previous year’s experience and shows the overall probability of getting an offer of admission given an applicant’s admission average.  This admission average is based on the required courses, usually mathematics, physics, chemistry, and English (depending upon the school, the location, and the curriculum).

Thanks to Bill Anderson, I now have an updated version of his blog post for 2019, based on experience with the 2018 admission cycle.  New this year, some changes have been made to more accurately display the information.  The biggest change is in the assumption that an admission average of 100% should result in a 100% probability of an offer.  When Bill first started constructing these graphs, this was a fair assumption but recent years have illustrated that it can now be misleading for the most competitive programs where there are many applicants with averages between 95% and 100% who unfortunately, did not receive offers of admission.  Now, the assumption (for graphical curve fitting purposes) is that the probability stays constant for 95% and higher and does not approach 100% probability.  With this change, the graph looks somewhat different than those previously posted. 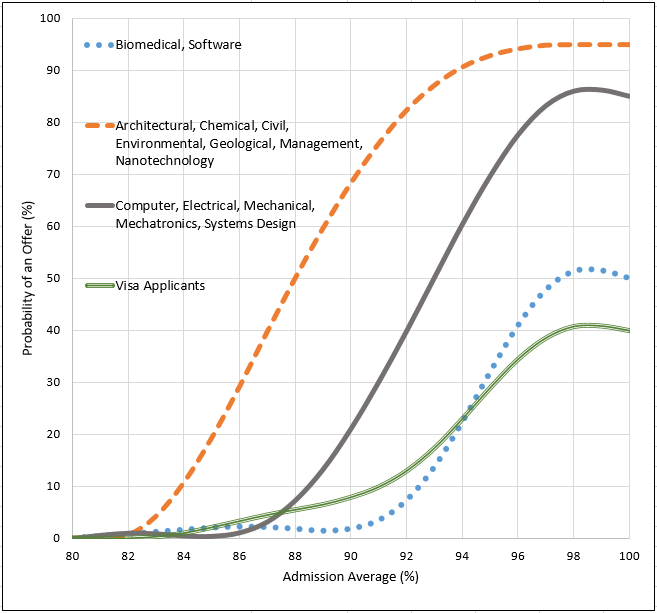 For example, this graph would suggest that of all the Canadian applicants to Mechatronics Engineering with an admission average of 94%, about 60% of these students will receive an offer of admission to their program of choice.  For the purposes of this graph, the admission average does not include any other factors such as work experience, extra-curricular activities, or other distinguishing factors.

This graph is based on the data shown on the Waterloo Engineering website.  As in previous years, programs with similar probabilities are lumped together for simplicity and clearer presentation.  This is based on the actual admission results for all 13,000+ applicants to Engineering in the 2018 cycle.  The apparent decrease in probability for averages from 98% to 100% is an artifact of the mathematical technique used to fit the curves and does not represent any real reduction in probability of admission.

In past years, Bill Anderson used Mathcad to fit cubic splines to the data shown on our website.  This year’s graph was produced by Bill Anderson using Maple, a home-grown Waterloo product that has been in existence for over thirty years.  I recall first using Maple in 1988 while visiting Brock University on a school trip.  I recall being amazed by what the tool was capable of solving on a Macintosh computer that at the time seemed better suited for drawing pictures than solving complex mathematical problems.  I am sure that the modern version of Maple is both faster, more reliable, and more powerful than the version I used so many years ago.

For those interested in the details of how the graph was produced, Bill used the “ArrayInterpolation” function with “method=spline” to get a cubic spline interpolation between the points.  As expected with a cubic spline method, there are some artifacts in the graph that are not actually meaningful.  There may be a better way to represent the data but this approach seems reasonable.

I grew up in the small town of Welland, Ontario in the heart of the Niagara Peninsula. In my youth, I enjoyed softball, golf, and the uniquely Canadian sport of 5-pin bowling. My high school years were productive. I excelled at my studies and had enough time to devote towards extra-curricular activities to earn a school letter. I was fascinated with computers having owned a Commodore 64 and having maintained a network of Unisys machines running a very early version of QNX at my local high school. I had part-time jobs teaching computer courses to both adults and children at local secondary schools. I worked hard in my final year of high school to excel at the now defunct Descartes math competition and earn a spot in Computer Engineering at the University of Waterloo. Little did I know that I would stay at the university for three degrees and eventually a permanent faculty position. Now, as Director of Admissions for Waterloo Engineering, I hope to share my thoughts on the road towards a career engineering. View all posts by William Bishop