Yesterday, I had the opportunity to attend the Waterloo-Wellington Science and Engineering Fair.  This fair attracts students from Grade 7 to Grade 12 to compete for awards and opportunities to represent the region at the Canada-Wide Science Fair organized by Youth Science Canada.  I have volunteered to help out with the running of the regional fair for approximately 15 years now.  A few years ago, I accepted the role of Division Co-Chair for the Engineering Division of the fair.  Essentially, this means that I co-ordinate the judging of the engineering projects and I participate in selecting the award-winning projects.

This year’s fair was the largest in recent years with 250 projects on display.  Locally, there has been a renewed interest in science projects.  I have no doubt that this is likely related to Donna Strickland receiving a Nobel Prize in Physics in 2018.  For many years, she has served as a judge at the fair, inspiring the next generation of scientists and engineers.  For an idea of what the fair looked like, check out the following image of the display booths at the fair. 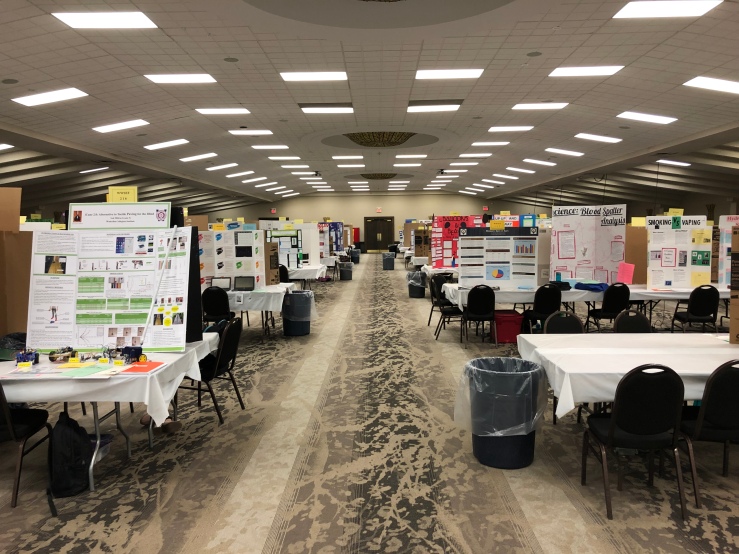 I was impressed by a number of projects that I had an opportunity to assess including two projects by Grade 12 students who have both applied to Waterloo Engineering.  Both of these students were looking forward to attending the University of Waterloo and I have no doubt that they will be highly successful here.  There were also some exceptional junior and intermediate projects.  One project that I particularly liked was a project that implemented a “Multispectral Detector for Non-Destructive Testing of Food”.  The project involved the design of electronics, software, and 3D printed casings for a handheld device to assess the freshness of fruit (in particular, pears).  Using the ingenious device, a person could quantitatively predict the ripeness of a pear.  It was an amazing project made even more impressive by the fact that it was designed, built, and tested by a Grade 7 student.

The complete list of 2019 Grand Award Winners is now available online.  The Award of Excellence for the best overall project at the fair was given to an engineering project entitled, “Random Forest Classification of Histopathological Images”.  This project attempted to automate detecting cancer in medical images.  The tool was not designed to replace a pathologist but rather to assist a pathologist in detecting false negatives (i.e., missing potential signs of cancer in a patient).  It was an impressive project from a student who has previously represented the region at the Canada-Wide Science Fair.

On behalf of the University of Waterloo and the over 200 volunteers from the community who assist with the operation of the fair, I would like to congratulate all participants on a great event celebrating science and engineering.  All of the students who participated should be very proud of their accomplishments.

I grew up in the small town of Welland, Ontario in the heart of the Niagara Peninsula. In my youth, I enjoyed softball, golf, and the uniquely Canadian sport of 5-pin bowling. My high school years were productive. I excelled at my studies and had enough time to devote towards extra-curricular activities to earn a school letter. I was fascinated with computers having owned a Commodore 64 and having maintained a network of Unisys machines running a very early version of QNX at my local high school. I had part-time jobs teaching computer courses to both adults and children at local secondary schools. I worked hard in my final year of high school to excel at the now defunct Descartes math competition and earn a spot in Computer Engineering at the University of Waterloo. Little did I know that I would stay at the university for three degrees and eventually a permanent faculty position. Now, as Director of Admissions for Waterloo Engineering, I hope to share my thoughts on the road towards a career engineering. View all posts by William Bishop